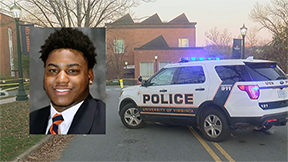 Charlottesville: Three people have been killed, and another two wounded after a gunman went on a shooting spree at a parking garage at the University of Virginia in Charlottesville, local authorities have revealed. The suspect, who is reportedly a former UVA football player, is still at large.

According to the university’s office of emergency management, the first reports of the shooting came in around 10:30 pm on Sunday. A campus-wide alert was issued shortly afterward, with students and staff urged to shelter in place.

University police identified the shooter as Christopher Darnell Jones Jr., adding that he may be driving a black SUV.