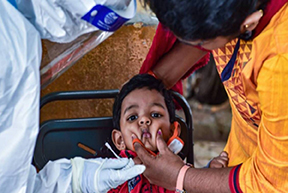 NEW DELHI, May 14 (Xinhua/APP) –: A viral fever has caused panic in the southern Indian state of Kerala, where at least 80 cases of what is locally known as tomato fever were reported, officials said Saturday.
The viral disease, which gets its name “tomato fever” because of the red blister it causes, has raised concern in Kerala and the neighboring states of Tamil Nadu and Karnataka.
Doctors say tomato flu comes with red rashes, skin irritation, and dehydration.
The illness that experts say is contagious can also cause tiredness, joint pain, stomach cramps, nausea, vomiting, diarrhea, coughing, sneezing, runny nose, high fever, or body ache. In some cases, it may also change the skin color of legs and hands, according to reports.
In Kerala, the disease has been detected in children under five years of age.