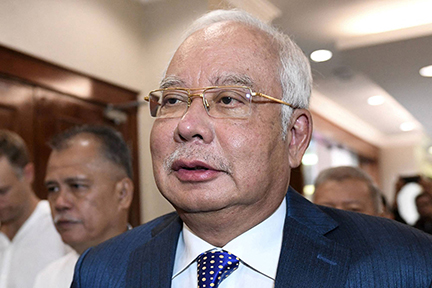 Putrajaya, Malaysia, Aug 23 (AFP/APP): Malaysia’s highest court Tuesday upheld former prime minister Najib Razak’s 12-year jail sentence for corruption in the 1MDB financial scandal.
“We find the appeal devoid of any merits. We find the conviction and sentence to be safe,” Chief Justice Maimun Tuan Mat said on behalf of a five-judge panel.
“Based on the foregoing, it is our unanimous view that the evidence led during the trial points overwhelmingly to guilt on all seven charges.”
Maimun said “it would have been a travesty of justice of the highest order if any reasonable tribunal, faced with such evidence staring it in the face, were to find that the appellant is not guilty of the seven charges preferred against him”.
The Federal Court decision was handed down after the tribunal threw out a last-minute move by Najib’s lawyers to recuse the chief justice from hearing the case, alleging bias on her part.
Najib is a UK-educated son of one of Malaysia’s founding fathers who had been groomed for the prime minister’s post from a young age.
The final ruling on the jail sentence also came four years after his long-ruling party’s shock election defeat in 2018, during which allegations he and his friends embezzled billions of dollars from state fund 1MDB were key campaign issues.
A lower court in July 2020 found Najib guilty of abuse of power, money laundering and criminal breach of trust over the transfer of 42 million ringgit ($10.1 million) from SRC International, a former unit of state fund 1MDB, to his personal bank account.
An appellate court in December denied his appeal, prompting him to go to the Federal Court for a final recourse.