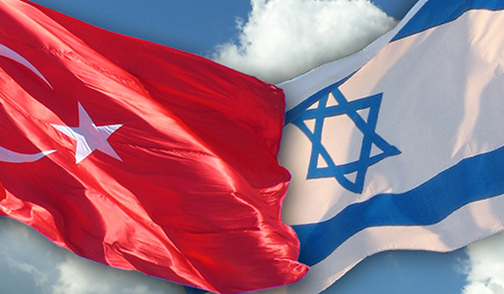 ANKARA: Turkey and Israel are poised to forge closer ties on various fronts, including military cooperation, after months of rapprochement.

For an official visit to meet his Turkish counterpart Hulusi Akar, Israel’s Defence Minister Benny Gantz is due in Turkey next Wednesday.

Days before elections in Israel, the visit will be the first by an Israel defense minister to Turkey in a decade.

Two months ago, Director of the Policy and POL-MIL Bureau Brig. Gen. (Ret.) Dror Shalom also visited Turkey “to reopen channels for defense ties between the countries,” the Defense Ministry of Israel said, preparing the framework of the upcoming ministerial meeting.

Ankara and Jerusalem had already developed close ties in the defense industry since the 1960s, along with engaging in security cooperation, intelligence sharing and joint military training.

Last June, joint security coordination between the two countries helped in organizing the arrests of several Iranians suspected of planning attacks against Israelis in Turkey.

Turkey was also among Israel’s main arms customers for armed Heron drones as well as electronic reconnaissance and surveillance systems. But, following the Mavi Marmara crisis in 2010, Turkey halted all its defense industry and military cooperation projects with Israel.

As part of a NATO patrol in the region, a Turkish warship, the TCG Kemalreis, docked in Haifa port in September along with a US destroyer.

“This is important in terms of diversifying cooperation channels and injecting content into the relationship,” he added.

“It enables the countries to renew previous mechanisms that were put on hold during years of crisis, like the joint economic commission, and to identify new issues for cooperation in light of changing regional realities, for example, in the field of security,” he said.

According to Goren, the timing of these visits, shortly before the Israeli elections, shows that engaging with Turkey is something that Israeli politicians believe enjoys public support in addition to serving national interests.

For Gabriel Mitchell, a Ph.D. candidate at Virginia Tech University and policy fellow at Mitvim, Gantz’s visit to Ankara should be viewed through multiple contexts.

“First, it marks the first engagement between senior officials since Lapid and Erdogan’s meeting at the UN General Assembly in late September, and the announced appointment of new ambassadors, once again affirming the continued process between the two countries to get relations back on track,” he told Arab News.

“While there are clear points of common interest between the sides, including developments in Ukraine, Syria and Iran, my assumption is that the process will be gradual and largely dependent on the successful reestablishment of relations between security elites,” he said.

That is why the meeting between Gantz — a potential prime ministerial candidate — and Akar is so important, Mitchell added.

According to Mitchell, regional initiatives will likely take longer to form given the political uncertainty in both countries and mixed sentiment in the region toward Erdogan.

Finally, Mitchell drew attention to the timing of the meeting in light of the domestic political situation in Israel.

“With elections being held on Nov. 1, government actors like Gantz must turn their sights abroad in order to demonstrate their bonafides to voters,” he said.

“While a visit to Turkey probably won’t sway many voters, Gantz is hoping to reinforce his image as a responsible political actor and with razor-thin margins, every gesture can make an impact,” he added.

Gallia Lindenstrauss, a senior research fellow at the Institute for National Security Studies in Israel, said that the visit is surprising for two main reasons.

“One is that elections in Israel at the time of the visit will be less than a week away, and hence it is not trivial that Gantz is going to Turkey at such a critical time,” she told Arab News.

Secondly, Lindenstrauss added, it was assumed that Israel and Turkey would find it hard to cooperate again in the defense realm as the two countries still remain suspicious of one another.

Israel has been investing in strategic relations in the region amid the growing security threat from Iran.

In early October, Gantz traveled to Azerbaijan, an important client for Israeli military technology, to deepen security ties with Baku, a close ally of Turkey. During the meetings in Baku, Israel’s developing ties with Turkey and other countries in the region were also discussed.

“What can explain the visit is that the current government does see the rapprochement with Turkey as one of its achievements in its short tenure,” Lindenstrauss said.

“Also, while one should not exaggerate tensions between Iran and Turkey, clearly there are growing tensions between the two. In this respect, Gantz’s visit to Turkey may relate to his visit earlier this month to Azerbaijan,” Lindenstrauss added.