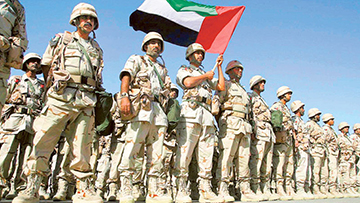 The UAE and US discussed deepening military cooperation yesterday during a meeting between Crown Prince Sheikh Mohamed bin Zayed Al Nahyan and General Michael Erik Kurilla, the Commander of US Central Command in the Middle East (CENTCOM).
CENTCOM is one of 11 unified combatant command units within the United States Department of Defence that have been installed to combat threats. For critics, however, the role of such command units is the preservation of US hegemony around the world. Spanning every region of the globe, together they coordinate American-led military operations. Member States within a specific command unit carry out a range of operations including combined military exercises, offer security assistance and share information.
Bin Zayed, who is also Deputy Supreme Commander of the UAE Armed Forces, received Kurilla at the Qasr Al Shati Palace in Abu Dhabi according to state news agency, WAM, where they discussed consolidating defence cooperation between the two countries.
The meeting comes as world powers make one last desperate move to salvage the Iran nuclear deal. The Gulf State, along with Israel, has been the strongest opponent of the deal which former US President Donald unilaterally withdrew from in 2018.
Last week, the US Senate overwhelmingly passed a non-binding resolution prohibiting the Biden administration from removing the terrorist designation from Islamic Revolutionary Guard Corps (IRGC) in exchange for a revival of the deal. Tehran is desperate to have this designation lifted. Removing IRGC from CENTCOM’s terrorist designation could reduce tensions and help to resolve the current deadlock.
With US congressional election only six months away and the Republicans — who look likely to win the majority — the Biden administration is in a race against time to salvage the deal. President Joe Biden has been keen to revive the agreement signed by his predecessor, Barack Obama, but the Republicans have stated that they will do everything they can to block the deal.
Gulf States have also held frantic meetings recently with Tehran. Co-operation and peace among the Gulf countries, especially Iran and Saudi Arabia, could prove critical for the fate of the nuclear deal.