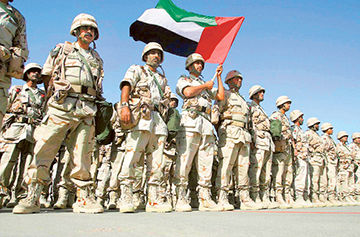 A senior Emirati officer from the UAE army will be joining the Israel National Defence College next year, to train under the Israeli military for 10 months, Arab48.com reported today.
The officer, a graduate of the College of National Security in the Emirates, which is run according to the American curriculum, enrolled after UAE President, Mohammed Bin Zayed, granted his approval.
An Israeli security official told Kan public broadcaster that, along with a symbolic importance, the move is also due to security and regional cooperation.
It comes as diplomats from the US, Israel and four Arab States are meeting today in the Bahrain capital, Manama, to discuss further cooperation.
The meetings are aimed at deepening cooperation in several fields, including water, tourism, health, energy, food and regional security. The latter covers mutual concerns over Iran’s nuclear ambitions and dialogue over the unresolved issue of the occupation of Palestinian land.
In September 2020, the UAE and Israel signed a US-sponsored deal to normalise their relations. Since then, the two countries have exchanged official visits by senior officials and have signed dozens of bilateral agreements in various fields, including investment, banking services and tourism.
Three other Arab States – Bahrain, Morocco and Sudan – joined the UAE in the controversial move that came to be known as the Abraham Accords.
The normalisation deals have drawn widespread condemnation from Palestinians, who say the Accords ignore their rights and do not serve the Palestinian cause.