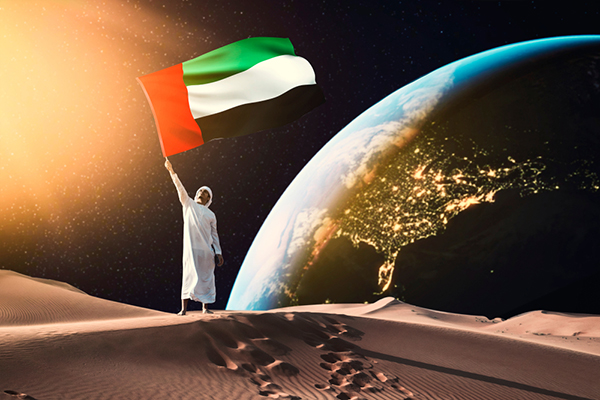 DUBAI: UAE President Mohamed bin Zayed announced an $817 million fund to support the space sector in a post on Twitter early Sunday.
The president announced a new $817m national investment and development fund for the space sector, The National Space Fund.
“The establishment of a dedicated fund to support the UAE’s burgeoning space programme and the launch of a new initiative to develop radar satellites are expected to expand our growing capabilities in this vital sector while accelerating innovation in environmental sustainability,” the president tweeted.
The Fund’s first project to be launched to space will be a constellation of advanced remote sensing satellites using radar technologies to provide unparalleled imaging capabilities.
The constellation is to be named Sirb after the Arabic term for a flock of birds.
Sheikh Mohammed bin Rashid Al Maktoum, the UAE vice president, prime minister, and ruler of Dubai, said on Twitter the fund aims to supporting the establishment of national companies in the space sector and boost national strategic and research projects.
Sheikh Mohammed bin Rashid said the “Sirb” project aims to develop the country’s competitiveness in the space sector.
The planned satellites will be able to create highly detailed and complex radar ‘images’ of land use, ice cover, surface changes and characterisation, with a wide range of scientific, civil and commercial applications, state-run WAM reported.
The statement on WAM said the project will contribute to UAE’s efforts to develop solutions to climate change, environmental sustainability and improved disaster management.
The platform will contribute to monitoring the changes that occur on the planet due to climate changes and help find innovative solutions for environmental sustainability, it added.