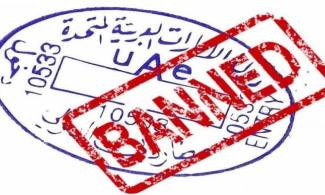 The UAE immigration authorities announced on Friday a visa ban on Nigerians looking to enter the country, adding that all submitted applications had been rejected with fees non-refundable.

According to a notice issued to its trading partners in Nigeria which includes travel agents, authorities in the emirate of Dubai declared that “All Dubai applications submitted are now rejected. It is general for Nigerians and approvals are on hold at the moment.”

“Kindly advise your clients to resubmit C2=A0 applications when the issue is resolved between both governments.”

The announcement comes over a month after the UAE stopped issuing tourist visas to Nigerians under the age of 40, except for those applying for family visas.

Although no specific reason was given behind the Gulf state’s decision, it may be related to a diplomatic row between the two countries from last year when Nigerians were barred from applying for work permits and had visa restrictions imposed on them.

According to Business Insider, there have also been instances of Nigerians stranded in the country with some “subjected to degrading situations. Most notable when the Covid-19 pandemic hit.”

Earlier this month, a Nigerian woman was sentenced to one year in prison after a picture she posted on Twitter in August went viral on social media showing how she along with other Nigerian nationals were being detained at Dubai international airport despite claiming to possess valid visas.