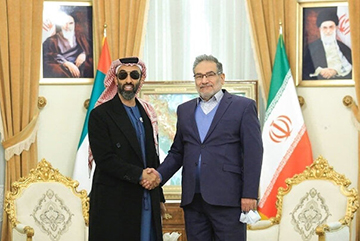 “During the conversation, the two sides discussed bilateral relations and ways to push them forward and enhance them in the common interest of the two neighbouring countries and the region,” WAM said.

The two diplomats also exchanged views on a number of regional and international issues of mutual concern, the agency said.

Bin Zayed expressed the UAE’s keenness “to enhance cooperation with neighbouring countries in a way that will consolidate the pillars of security and stability in the region and achieve the aspiration of their people for development and prosperity,” WAM said.

In recent months, Emirati officials have made several visits to Iran to enhance trade and economic cooperation.

Abu Dhabi said recently that it is in the process of returning its ambassador to Tehran after a rupture for years.