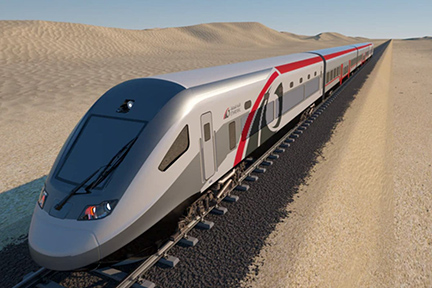 During a two-day state visit by the UAE’s president, Mohamed bin Zayed Al Nahyan to Oman, in which he met with Sultan Haitham bin Tariq in the capital, Muscat, the two leaders signed the deal to connect Abu Dhabi with Sohar, to the north of Muscat, by rail.

Under the agreement, Etihad Rail – the developer and operator of the UAE National Rail Network – and Oman Rail will jointly establish an equally-owned company named the Oman-Etihad Rail Company.

Possessing an investment value of US$3 billion to design, develop and operate the joint railway network, the 303 kilometers-long railways will primarily link Sohar to Abu Dhabi. While passenger trains enable travel time from the two cities to be 1 hour and 40 minutes, and from Sohar to Al Ain to be 47 minutes at a maximum speed of 200 kilometers per hour, freight trains will be able to run up to 120 kilometers per hour.

By the year 2030, however, it is expected to carry millions of passengers on an annual basis between the major cities. The cross-border service will serve both passengers and trade and is hailed as a boost to the two countries economic, transport, and trade capabilities.

According to the Emirati state news agency, WAM, the Chief Executive of Etihad Rail, Shadi Malak, said the agreement “lays out a strategic roadmap for a sustainable project that will contribute to strengthening the solid relations between the UAE and Oman.”