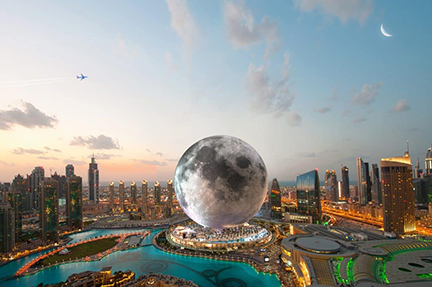 The UAE is looking to construct a $5 billion (18 billion dirham) resort resembling the moon, according to a report last week by Arabian Business.

Canadian architectural firm and property licensor, Moon World Resorts Inc (MWR) is reportedly behind the proposed project, which is estimated to be built within 48 months, and will have an overall height of 735 feet (224 metres).

The development will be surrounded by a “lunar colony” which will be able to accommodate 2.5 million guests annually, to experience “affordable space tourism” in the country.

“Moon Dubai will significantly impact every aspect of the emirate’s economy including tourism, transportation, commercial and residential real estate, infrastructure, financial services, aviation and space, energy, MICE, agriculture, technology and of course education,” Henderson said, adding this would “firmly plant the UAE flag into the forefront of space exploration.”

Henderson also revealed that the company is hoping to offer licences for three other Moon resorts in North America, Europe and Africa.

“Within the MENA region we could see Moon being developed in either the UAE, Saudi Arabia, Qatar, Bahrain or Kuwait,” he told the National.

The UAE is already a pioneer among Arab states in space exploration and has earmarked $820 million to fund its space sector, including plans to build satellites. Last year, the UAE made history by becoming the first Arab state and fifth globally to reach the planet Mars as part of a space probe mission. There are also plans to carry out a lunar landing by 2024 as part of a collaborative project with Israel.

In May, the Mohammed Bin Rashid Space Centre (MBRSC) announced that the UAE will be launch “the first Arab long-duration space mission”, in which an Emirati astronaut will take part in a six-month mission, scheduled for the first half of 2023 from the Kennedy Space Centre in the US State of Florida.