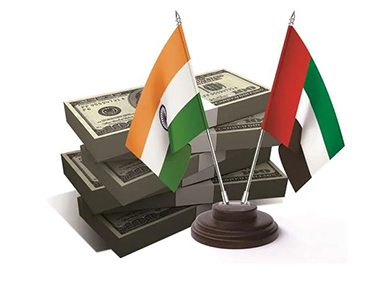 The UAE has committed itself to invest $100 billion in India across several sectors, the country’s commerce and industry minister, Piyush Goyal, revealed on Friday. Goyal made the announcement at the India-UAE Economic Partnership Summit in Mumbai.
“The commitment from the UAE is to look at over $100bn of investment to India in different sectors such as manufacturing, infrastructure, services,” explained Goyal at the launch of the “India-UAE Start-up Bridge”, part of a trade agreement between the two countries. In attendance at the event was the UAE’s Economic Minister, Abdulla Bin Touq.
The trade deal, known as the Comprehensive Economic Partnership Agreement (CEPA), was signed in February and came into effect on 1 May. In a tweet on Friday, Goya said that the CEPA will usher in a “golden era in our economic ties.”
Bin Touq’s four-day tour of India began on Wednesday. He arrived in New Delhi with a delegation of 80 trade representatives.
After the US and China, the UAE is now India’s third-largest trading partner. India is the UAE’s top trading partner for non-oil exports, accounting for almost 14 percent of its total non-oil exports globally. Bilateral trade between the countries presently stands at $60bn but is expected to reach $100bn within five years.
Goyal added that he expects trade to go up to $250bn by 2030. “Clearly, millions of jobs will be added if our exports, which are now at about $36bn, grow as we are planning. And my own guess estimate is this partnership can finally go up to about $250bn of bilateral trade on both sides.”