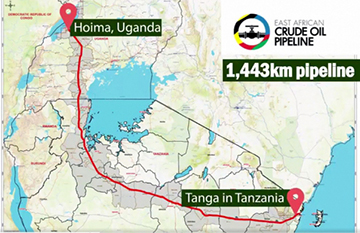 Nairobi, Sept 16 (AFP/APP): Uganda’s President Yoweri Museveni vowed Friday to proceed with a massive and controversial East African oil project, dismissing a resolution by European lawmakers calling for it to be delayed over “rights violations”.
France’s TotalEnergies and the China National Offshore Oil Corporation (CNOOC) signed a $10-billion agreement earlier this year to develop Ugandan oilfields and ship the crude through a 1,445-kilometre (900-mile) pipeline to Tanzania’s Indian Ocean port of Tanga.
The scheme has run into strong opposition from rights activists and environmental groups that say it threatens the livelihoods of tens of thousands of people and fragile ecosystems in the region.
The European Parliament resolution adopted on Thursday voiced concern over “human rights violations” in Uganda and Tanzania linked to investments in fossil fuel projects.
These included “wrongful imprisonment of human rights defenders, the arbitrary suspension of NGOs, arbitrary prison sentences and the eviction of hundreds of people from their land without fair and adequate compensation”.
It said more than 100,000 people were at risk of being displaced by the East Africa Crude Oil Pipeline (EACOP) and called for them to be adequately compensated.
It also urged TotalEnergies to take a year before launching the project to study the feasibility of an alternative route “to better safeguard protected and sensitive ecosystems and the water resources of Uganda and Tanzania”.

Museveni said on Friday that the project would “proceed as stipulated in the contract we have with TotalEnergies and CNOOC.”
“Total Energies convinced me about the Pipeline idea; if they choose to listen to the EU Parliament, we shall find someone else to work with,” he said on Twitter.
“Either way, we shall have our oil coming out by 2025 as planned. So, the people of Uganda should not worry.”
The project aims to extract the huge crude reserves under Lake Albert, a 160-kilometre-long natural border between Uganda and the Democratic Republic of Congo, and ship the oil through what would become the world’s longest heated pipeline.
Lake Albert lies atop an estimated 6.5 billion barrels of crude, of which about 1.4 billion barrels are currently considered recoverable.
Earlier on Thursday Uganda’s deputy speaker, Thomas Tayebwa, reacted angrily to the EU parliament resolution.
“These are projects which were approved by the parliament of Uganda, the parliament of a sovereign country and anything to do with challenging their approval is an affront to the independence of this house and we cannot take it lightly,” he said.

But environmental group Friends of the Earth France welcomed the MEPs’ stance.
“It sends a strong political message against the Tilenga project, whose human, environmental and climate costs are undeniable and simply unacceptable,” senior campaigner Juliette Renaud said in a statement.
Tilenga is the oilfield development project operated by TotalEnergies in the Lake Albert region of northwestern Uganda.
TotalEnergies has insisted it has taken steps to reduce the overall scheme’s impact on people and the environment.
“We are doing everything we can to make it an exemplary project in terms of transparency, shared prosperity, economic and social progress, sustainable development, with environmental consideration and respect for human rights,” it said in reaction to the EU parliament resolution.
Museveni has in the past hailed the project as a major economic boost for the landlocked country, where many live in poverty.