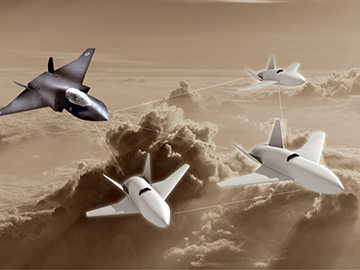 The United Kingdom has cancelled its Mosquito ‘loyal wingman’, deciding instead on a “change of direction” for the Lightweight Affordable Novel Combat Aircraft (LANCA) programme from which it was being developed.
Announced by the Ministry of Defence (MoD) on 24 June, the decision by the Royal Air Force (RAF) Rapid Capabilities Office (RCO) not to take the Mosquito beyond its current design phase was decided on the basis that the desired additive capabilities can be better achieved by other means.
“The decision was informed by parallel analysis and capability experimentation conducted by the RAF and the Defence Science and Technology Laboratory (Dstl),” the MoD said in a statement. “The accumulation of analysis concluded that more beneficial capability and cost-effectiveness appears achievable through exploration of smaller, less costly, but still highly capable additive capabilities.”