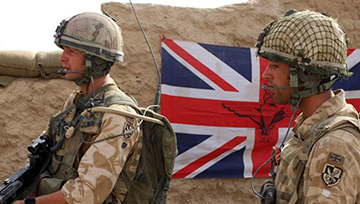 More than 50 detainees and unarmed men were killed by British troops in Afghanistan, according to newly obtained military reports and an investigation by the BBC, Anadolu Agency reported.
BBC Panorama program, which is to be aired on Tuesday night, looked into documents of operations by the Special Air Service (SAS) – a British elite unit used in special operations – and found they include “reports covering more than a dozen ‘kill or capture’ raids carried out by one SAS squadron in Helmand in 2010/11.”
Individuals who served with the SAS squadron on that deployment talked to the program and said they witnessed the SAS operatives “kill unarmed people during night raids,” according to a BBC News report.
According to the former soldiers’ account, an individual’s murder was justified by planting an AK-47 rifle assault in the scene and some individuals within the force “were competing with each other to get the most kills.”
The report also alleges that “internal emails show that officers at the highest levels of Special Forces were aware there was concern over possible unlawful killings, but failed to report the suspicions to military police despite a legal obligation to do so.”
The investigation by the BBC suggests that “one unit may have unlawfully killed 54 people in one six-month tour.”
General Sir Mark Carleton-Smith, the former head of UK Special Forces, was “briefed about the alleged unlawful killings but did not pass on the evidence to the Royal Military Police, even after the RMP began a murder investigation into the SAS squadron.”
The Defense Ministry said the Panorama program “jumps to unjustified conclusions from.” That have already been fully investigated,” adding that the investigation into incidents alleged in the program did not find sufficient evidence to prosecute.
The ministry also said it “stands open to considering any new evidence, there would be no obstruction.”