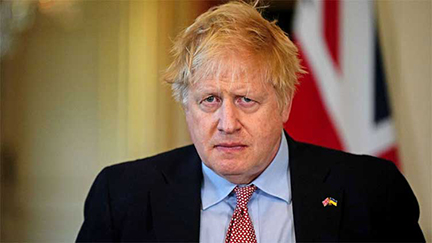 London, July 8 (AFP/APP): Boris Johnson resigned on Thursday as leader of Britain’s Conservative party, triggering a prolonged race to succeed the scandal-dogged premier after an extraordinary exodus of ministers from his government.
Johnson acknowledged it was “clearly the will of the parliamentary Conservative party that there should be a new leader of that party, and therefore a new prime minister”.
In a six-minute speech outside 10 Downing Street that was devoid of contrition for the many missteps that brought him down, he said he would stay on until his successor is found.
But calls built for Johnson to leave immediately, and for an acting leader to head the world’s fifth-largest economy.
Conservative John Major, who was prime minister from 1990 to 1997, said Johnson’s extended tenure — and the vast powers that still go with it — was “unwise and may be unsustainable”.
The leadership election is expected to take place over the coming months. The victor will replace Johnson by the party’s annual conference in early October.
But polling suggested most Britons favour his rapid exit, amid claims that Johnson is only hanging on to enjoy a wedding party with wife Carrie at his government-funded country retreat.
Johnson’s tumultuous three years in office were defined by Brexit, the Covid pandemic and non-stop controversy about his reputation for mendacity.

The 58-year-old said he was “sad… to be giving up the best job in the world”, justifying his refusal initially to surrender to his “herd” of Tory critics because he won a personal mandate in the Brexit-dominated general election of December 2019.
Johnson also promised support for Ukraine “for as long as it takes”.
He reiterated his backing in a call afterwards to President Volodymyr Zelensky, Downing Street said.
Zelensky said he and Ukraine would be sad to see Johnson go, praising his “personal leadership” and “charisma”.
Russia expressed hope for “more professional people” to come to power in Britain.
“But at the moment there is little hope for that,” Kremlin spokesman Dmitry Peskov told reporters.
Defence minister Ben Wallace and Rishi Sunak, whose departure as finance minister Tuesday sparked the cabinet exodus, were among the early frontrunners, a YouGov survey of Tory members suggested.
Conservative MP Tom Tugendhat said late Thursday he was launching his bid to succeed Johnson, the first candidate to announce their campaign since the premier announced his resignation.
Foreign Secretary Liz Truss, another potential contender, said Johnson had “made the right decision” as she cut short a trip to Indonesia for a G20 meeting.
“We need calmness and unity now and to keep governing while a new leader is found,” she tweeted.