UK to remove visa requirement for GCC nationals visiting from 2023 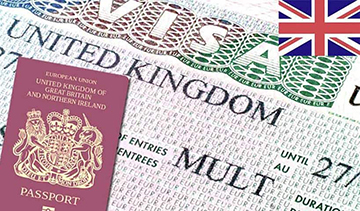 LONDON: Gulf Cooperation Council nationals will no longer be required to apply for a visa before visiting Britain from 2023, the UK government announced today.
Under Britain’s new Electronic Travel Authorisation (ETA) scheme, rolling out next year, nationals from Bahrain, Kuwait, Oman, Qatar, Saudi Arabia and the UAE will join Americans and Canadians in benefiting from visa-free travel.
Home secretary Priti Patel said: “This move means that Gulf states will be among the first countries in the world to benefit from ETAs and visa-free travel to the UK.
“Our number one priority is the security of the UK border and by launching ETAs we can ensure that everyone wishing to travel to the UK has permission to do so in advance of travel and refuse those who pose a threat.”
The ETA is part of the British government’s plan to fully digitize its border by the end of 2025 and mirrors the list of nationals who do not currently require visas for short stays or transiting.
Once granted, the ETA is akin to a multi-travel visa covering extended stays but until its introduction, GCC nationals will continue to benefit from access to the Electronic Visa Waiver scheme, which can be completed online before visits to Britain.
Describing the ETA process as “straightforward,” the Home Office said the scheme will “act as an additional security measure allowing the government to block threats” but would also provide individuals “more assurance at an earlier point in time about their ability to travel.”