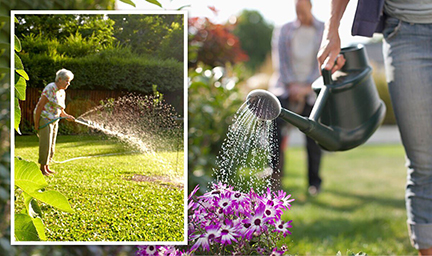 LONDON, UK, Aug 17 (AA/APP): A major British water company on Wednesday announced a hosepipe ban for the south of England from next week, following prolonged heat waves and an official drought.

In a statement, Thames Water, which provides water services to over 15 million people, said: “From Wednesday 24 August, we’re bringing in a hosepipe ban (also known as a Temporary Use Ban) for all customers we supply water to,” Thames Water said in a statement.

“After the driest July on record, and below average rainfall in 10 of the last 12 months, water levels in our rivers and reservoirs are much lower than usual. We have more teams reducing leakage than ever before, working 24/7 to find and fix more than 1,100 leaks every week,” it added.

Under the hosepipe ban, people will be restricted from the commercial use of water which includes watering their gardens, filling their pools and ponds as well as washing their cars.

Thames Water is the latest company to introduce a ban after a number of companies introduced similar restrictions in Hampshire, the Isle of Wight, Essex and Kent that will come into force on Friday this week.

Several other companies are in the process of applying for drought permits which would allow them to implement such bans. These include Yorkshire Water, Severn Trent and South West Water.

The government has been urging water companies to implement hosepipe bans in light of successive heatwaves which have made this year’s summer the hottest since records began.

The month of July was the hottest after witnessing a record 40 degrees Celsius (104 degrees Fahrenheit). Less than 10% rainfall was recorded in all regions across the southeast of England, making it the driest year since 1836.

Although the Met Office has warned of thunderstorms, torrential rain and flooding, which has affected parts of southwest England, drought conditions are expected to linger on until October with hot weather predicted in the coming weeks.