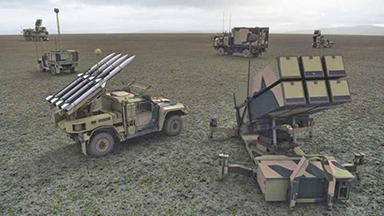 “We did just deliver two NASAMS systems. … We delivered two of them to the government a couple of weeks ago. They’re being installed in Ukraine [imminently],” CEO Greg Hayes said on CNBC’s “Squawk on the Street.”

“It is a short-range air defense system, and it can fire [an AIM-120 Advanced Medium-Range Air-to-Air Missile] and it could knock down everything in the sky from drones to ballistic missiles to fighter jets,” Hayes said.

The Norwegian-developed weapons will provide medium- to long-range defense against Russian attacks, which bombarded Ukraine’s civilian infrastructure over the last two weeks, including its power grid, using missiles and drones.

The U.S. has pledged to deliver two NASAMS within weeks and six more over a longer time frame. Pentagon officials have said the first NASAMS were able to be purchased quickly because the the bulk of the systems had already been produced.

A senior Pentagon official said Monday the NASAMS were expected to be delivered “within the next couple of weeks” and that Ukraine would announce when they in the country and operational.

The U.S. military would “continue to work hard to get those there as quickly as possible,” the official said.

In Raytheon’s third-quarter earnings call Tuesday, Hayes said the firm expects to see more orders of NASAMS to follow “shortly” with surging demand for the firm’s products since Russia’s invasion of Ukraine.

The United States has provided more than $17 billion worth of military aid since Russia invaded Ukraine on Feb. 24 and slapped a broad range of sanctions on Moscow.