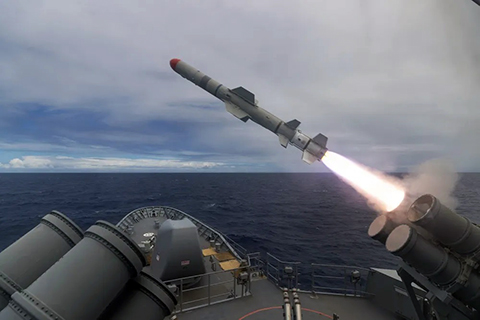 The US-made Harpoon anti-ship missiles supplied to Ukraine have already been deployed, Ukrainian Defense Minister Alexey Reznikov said on Thursday in a lengthy post on social media. Denmark confirmed sending this type of weapon to Kiev last month.
Ukraine’s coastal defense “has been strengthened by the extremely efficient Harpoon systems,” the official said. He claimed that, together with the domestically-made Neptune missiles, they were “already forcing the enemy fleet to keep its distance to avoid the fate of the flagship of the Russian Black Sea Fleet, the Moskva.”
The Soviet-built warship sank in mid-April. Officials in Kiev claimed Ukrainian forces successfully hit it with Neptune missiles. Moscow said a fire onboard caused heavy damage to the ship and that it subsequently sank in a storm during an attempt to tow it to its home port.
Reznikov has previously hailed the Harpoon-Neptune combination as a “military brotherhood” that will enable Ukraine to “liberate and make our Black Sea safe again.”
The McDonnell Douglas-developed Harpoon missile family can be fired by various platforms. Denmark fields RGM-84L-4 Harpoon Block II missile batteries have a range of 70 nautical miles (130 kilometers). The Neptune is a Ukrainian modification of the Soviet Kh-35 missile with a claimed range of 280 kilometers.