Ukrainians cutting electricity use by up to 20%: operator 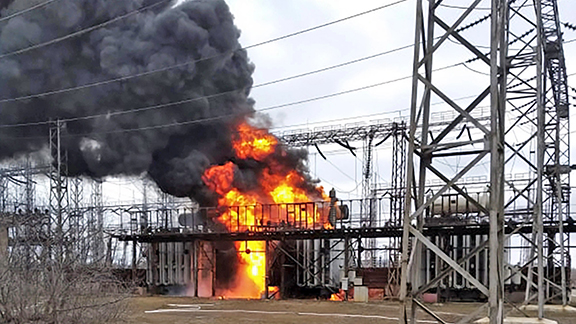 Kyiv, Ukraine, Oct 22 (AFP/APP): Some parts of Ukraine are reducing their electricity use by up to 20 percent, national energy operator Ukrenergo told AFP on Saturday.

“We are grateful to both people, who have reduced their consumption at home, and to businesses, who are doing the same in their offices and workplaces. We see savings in different regions and on different days the level of voluntary consumption reduction ranges from five to 20 percent on average,” Ukrenergo chief Volodymyr Kudrytskyi said in written comments to AFP.
He added that while these were “significant volumes” for Ukraine’s energy system, they were not enough for regions where the infrastructure “suffered the most damage” and Ukrenergo must resort to “forced restrictions”.
Russian forces have carried out a series of strikes targeting especially Ukrainian energy infrastructure in recent days, with the latest slew of attacks reported across the country on Saturday morning.
Kudritskyi said that the barrage of strikes that came on October 10-12 was “the largest attack on an energy system in European history”.
Russian forces rained more than 80 missiles on cities across Ukraine on October 10, according to Kyiv, in apparent retaliation for an explosion that damaged a key bridge linking the Crimean peninsula to Russia.
He said that in response to the attacks, Ukrenergo has established 70 repair crews with about 1,000 specialists.
“Depending on the degree of the damage after the shelling, it is possible to restore power supply within a period of several hours to a day,” he said.