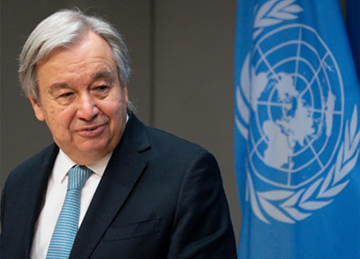 UNITED NATIONS, Sep 12 (APP): UN Secretary-General Antonio Guterres returned to New York Sunday night after wrapping up his two-day flying visit to flood-ravaged Pakistan where he saw for himself the worst-affected areas and called for urgent financial support to the country.

More than 1,300 lives have been lost, tens of millions of people are now homeless, one-third of this vast country is submerged, and livestock and crops have been wiped out. Moreover, education and learning has been interrupted for an estimated 3.5 million children, including in at least 61 refugee schools.

“I have seen many humanitarian disasters in the world, but I have never seen climate carnage on this scale. I have simply no words to describe what I have seen today: a flooded area that is three times the total area of my own country, Portugal,” the UN chief told reporters in Karachi as he concluded his field visits to Sindh and Balochistan.

While he had been struck by the “unquantifiable depths of human suffering” he had witnessed, he stressed that he had also seen “great heights of human endurance and heroism – from emergency workers to ordinary people helping their neighbors.”

Earlier on Saturday Guterres traveled from Islamabad to Sukkur in Sindh by plane, accompanied by Prime Minister Shehbaz Sharif and Foreign Minister Bilawal Bhutto Zardari. His visit ended in Karachi on Saturday evening, where he held a joint press conference with the Foreign Minister at the airport.

Speaking on the tarmac, they were flanked by a freshly arrived aid shipment from the UN refugee agency, UNHCR, that will be heading to help the effected communities.

The Secretary-General paid tribute to the massive response efforts of the Pakistani authorities – civilian and military, national and regional.

He added: “I also want to thank the civil society, humanitarian organizations and my UN colleagues who have rushed in. I also want to take profit to thank all those donors who have started to support Pakistan in this terrible hour.”

The needs are enormous, and that’s why “I urge massive and urgent financial support for Pakistan. And this is not just a question of solidarity or generosity. It is a question of justice.”

Foreign Minister Bilawal thanked the Secretary-General, saying that the UN chief had visited “Pakistan in our time of difficulty and witnessed first-hand the devastation that has been caused by the catastrophic monsoon rains that we faced for many months.”

He stressed that not only the crisis is not made by Pakistan, “but the response to this crisis must also be a global response.”

The United Nations has already issued a flash appeal for $160 million to help Pakistan cope with the devastation left behind by the catastrophic floods.