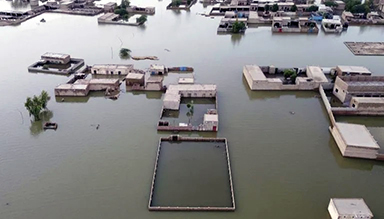 UNITED NATIONS, Sep 07 (APP): UN Secretary-General Antonio Guterres leaves to Pakistan Wednesday night to express his “deep solidarity with the Pakistani people” hit by devastating flooding, saying he would also appeal for the international community’s “massive” support to them in this hour of need.

The UN chief will be accompanied, among others, by Martin Griffiths, the world body’s Under-Secretary-General for Humanitarian Affairs and Emergency Relief Coordinator, during the two-day visit to Pakistan, which begins on Sept. 9.

The secretary-general, along with his delegation, will inspect flood-affected areas in Khyber Pakhtunkhwa and Sindh provinces. He will leave Islamabad for New York on Sept. 11.

On August 31, Guterres urged the world to come to Pakistan’s aid as he launched a $160 million appeal to help the tens of millions affected in the disaster.

“Tomorrow I will be flying to Pakistan to express my deep solidarity with the Pakistani people and to appeal for the massive support of the international community to the Pakistanis, in this hour of need after the devastating floods that we are witnessing,” the secretary-general told reporters on Tuesday afternoon at UN Headquarters in New York.

He called for not only focusing on the war between Russia and Ukraine, but also on another serious and immensely pressing matter — climate change. With deadly flooding in Pakistan and famine in the Horn of Africa, climate change is continuing to have lethal affects across the world.

“There is a lot of attention on the war of Ukraine, but people tend to forget there is another war – the war we are waging on nature. And nature is tracking back. And climate change is supercharging, the destruction of our planet,” the UN chief pointed out.

“Pakistan, Chad, and the Horn of Africa, where the drought is causing famine. All these things represent an enormous threat to all of us,” he said.

“Today it is Pakistan. Tomorrow it can be anywhere else.”

To deal with climate change, Guterres added, is the defining issue of our time, with a business-as-usual approach a pure suicide.

Meanwhile, the UN team in the country and its partners are continuing to provide relief materials to flood-stricken people.