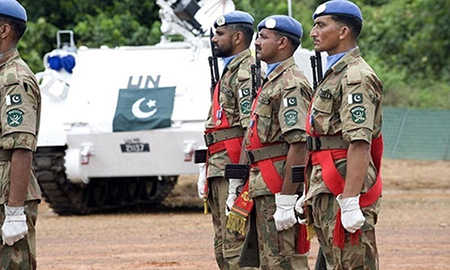 “The purpose of Mr Lacroix’s visit is to thank the countries for their contributions and support to UN peacekeeping, as well as to update on progress enhancing the effectiveness of peacekeeping, including through the (UN) Secretary-General’s Action for Peacekeeping+ initiative (A4P),” Spokesman Stephane Dujarric told the regular noon briefing at UN Headquarters in New York.

The A4P initiative aims at focusing on key priorities that are designed to be catalytic and enhance UN missions’ impact.

Pakistan has been one of the largest troop contributors to UN peacekeeping operations in hot spots around the world.

Besides Pakistan, Under-Secretary-General Lacroix will visit India, United Arab Emirates (UAE), and Japan. No dates were given.

In New Delhi, Lacroix will participate in a two-day meeting organized by the Challenges Forum, which brings together leading policymakers, practitioners, and academics on key issues linked to peace operations.

During his visit, the UN peacekeeping chief will meet senior government officials.