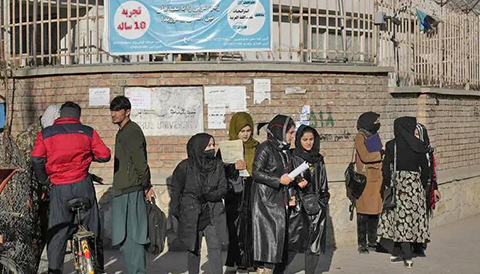 UNITED NATIONS, Dec 22 (APP): The United Nations and several countries on Wednesday condemned the Taliban’s decision to close universities to women and called for the de facto authorities to “immediately revoke the decision”.

In a statement, the UN Assistance Mission in Afghanistan (UNAMA) also urged the de facto authorities to “reopen girls’ schools beyond the sixth grade and end all measures preventing women and girls from participating fully in daily public life”.

UN Human Rights High Commissioner Volker Turk described the ban as “another appalling and cruel blow to the rights of Afghan women and girls and a deeply regrettable setback for the entire country”.

Reminding that their systematic exclusion from virtually all aspects of life is “unparalleled in the world”, he upheld that banning women from tertiary education is “all the more heart-breaking” when considering their vital contributions over the years.

“Coming on top of girls being barred from attending secondary school, just think of all the female doctors, lawyers and teachers who have been, and who will be, lost to the development of the country”, said the senior UN official.

He stated that suspending women from tertiary and higher education is in “clear violation” of Afghanistan’s obligations under international law, adding that their rights to access all levels of education without discrimination is “fundamental and unquestionable”.

Banning women from attending university is a continuation of the Taliban’s systematic discrimination policies, it was pointed out.

Since August 2021, they have barred girls from secondary school, restricted women and girls’ freedom of movement, excluded women from most of the workforce and banned them from using parks, gyms and public bath houses.

These restrictions culminate with the confinement of Afghan women and girls to the four walls of their homes, according to UNAMA.

“Preventing half of the population from contributing meaningfully to society and the economy will have a devastating impact on the whole country”.

UNAMA reminded that these practices would expose Afghanistan to further international isolation, economic hardship, and suffering, “impacting millions for years to come”.

“The UN estimates that restricting women from working can result in an economic loss of up to $1 billion – or up to five per cent of the country’s GDP”, UNAMA said, adding that banning women from universities, including female teachers and professors, will contribute to additional economic losses.

Education is a basic human right, reminded the UN mission. Excluding females not only denies them this right, “it denies Afghan society as a whole the benefit of their contributions”.

The de facto authorities’ exclusion of women and girls from education, the workplace and other areas of life increase risks of forced and underage marriage, violence and abuse, UNAMA pointed out.

“Continued discrimination against more than half the population of the country will stand in the way of Afghanistan achieving an inclusive society where everyone can live in dignity and enjoy equal opportunities”.

The organization and its partners remind the Taliban that taking away the free will of women, disempowering and excluding them from all aspects of public and political life stands against universal human rights standards upon which peaceful and stable societies are based on.

“This decision will be a negative factor for Afghans abroad considering to return and force more to flee the country”, the statement continued.

UN Resident and Humanitarian Coordinator in the country, Ramiz Alakbarov, said on Twitter that the Organization “speaks with one voice”, in sharing the outrage of millions of citizens as well as the international community.

“Education is a fundamental human right”, he tweeted.

At the same time, 19 UN-appointed human rights experts condemned the decision in the strongest terms, noting that among many other “irrational restrictions”, the move may amount to gender persecution, a crime against humanity.

The announcement is “a flagrant violation of their human rights enshrined in multiple international treaties, to which Afghanistan is a signatory and will lead to disastrous consequences for Afghans”, they said in a joint statement.

The experts also flagged that other Islamic scholars said that there is no religious or cultural justification for it.

Educating women and girls lays the foundation for women’s economic empowerment, and is fundamental to achieving gender equality.

Without educated women, fewer professionals would be on hand to serve the population and take Afghanistan forward, the experts maintained.

They pointed out that women doctors are needed to provide females with adequate medical care as the de facto authorities restrict male physicians from treating women and girls.

Without women teachers, who previously made up 82 per cent of the Education Ministry, children’s learning will suffer and female lawyers, provide women and their families access to justice.

“The intergenerational impacts of such a restriction will be profound and disastrous for Afghanistan”.

They urged the Taliban to “stop using women and girls’ safety as a pretext for imposing severe and disproportionate restrictions on them and instead address the root cause of violence and discrimination against women and girls – namely the behaviour and attitudes of men who view them inferior and subordinate to men and boys”.

Meanwhile, the World Food Programme (WFP) shared survey results revealing that women and girls in Afghanistan are hit hardest by the humanitarian and economic crises there.

Limitations on working make it impossible for many to feed themselves and their children, increasing the risk of desperate coping strategies – including selling assets, pulling their children out of school or skipping meals altogether, said WFP.

Women’s mobility has been further limited by forcing them to be accompanied by male chaperones – rendering markets, clinics and distribution points more difficult to access.

And some 800,000 pregnant and breastfeeding malnourished women are the highest number ever recorded in Afghanistan, perpetuating a vicious circle of malnourished mothers giving birth to a malnourished children, the agency added.
ty.”

In Washington, he US said such a move would “come with consequences for the Taliban”.

“The Taliban cannot expect to be a legitimate member of the international community until they respect the rights of all in Afghanistan,” said Secretary of State Antony Blinken in a statement.

“No country can thrive when half of its population is held back.”

Western countries have demanded that the Taliban improve female education if they wish to be formally recognized as Afghanistan’s government.

In New York, addressing the UN Security Council, Pakistan’s Ambassador Munir Akram said that Pakistan was “extremely disturbed” by the latest announcement on restrictions on higher education for women in Afghanistan, but called for cooperation and persuasion instead of coercion to ensure women’s rights.