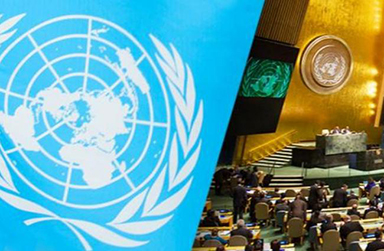 UNITED NATIONS, Nov 15 (APP):: Pakistan, along with 72 other countries, abstained when the UN General Assembly Monday voted to adopt a resolution calling for Russia to be held accountable for international law violations relating to the war in Ukraine, including by paying war reparations.

Sponsored by 57 countries, the resolution garnered in the 193-member Assembly 94 votes in favor to 14 against, including Russia, China, Cuba, Mali, and Ethiopia.

It was the lowest level of support for any of the five resolutions about Ukraine that the General Assembly had passed since Russia invaded neighboring Ukraine on Feb. 24.

Further, the resolution recommended the establishment of an international mechanism for reparation for damage, loss, or injury arising from Russia’s wrongful acts.

Speaking in an explanation of his vote, Pakistani delegate Gul Qaiser said while Pakistan supports the establishment of a claims commission, any such mechanism must be based on sound legal foundations.

But, he said the resolution failed to address key legal requirements in a comprehensive manner.

Qaiser, the first secretary of the Pakistan Mission to the UN, also said it would be “unprecedented” to establish the proposed mechanism that is neither managed by nor accountable to any of the UN principal organs, including the Assembly.

Noting that many of the co-sponsors of the draft resolution had consistently opposed any discussion on such an international mechanism for seeking reparations for slavery and colonialism, the Pakistani delegate said that double standards in the application of international law were counterproductive.

“Universal and consistent adherence to the purposes and principles of the UN Charter is imperative, not only to ensure the credibility and legitimacy of the UN system but also to strengthen accountability and justice for serious violations of international law,” Qaiser said.

Irrespective of the origin of the conflict, he added, the highest priority at this moment is the immediate cessation of hostilities and the resumption of dialogue – through direct negotiations, mediation, or other peaceful means – to resolve the conflict and restore peace and security in Ukraine.

In presenting the resolution to the Assembly, Ukrainian Ambassador Sergiy Kyslytsya insisted that Russia must be held accountable for its violations of international law.

“Seventy-seven years ago, the Soviet Union demanded and received reparations, calling it a moral right of a country that has suffered war and occupation,” he said.

“Today, Russia, who claims to be the successor of the 20th century’s tyranny, is doing everything it can to avoid paying the price for its own war and occupation, trying to escape accountability for the crimes it is committing.”

Kyslytsya pointed out that Russia also supported the creation of the UN Compensation Commission (UNCC), established in 1991 following Iraq’s invasion and occupation of Kuwait.

The Commission completed its mandate in February, he reported, having paid out over $52 billion in reparations to victims.

The Ambassador outlined the impact of the Russian war on Ukraine ,including bombings targeting residential buildings and infrastructure, the demolition of nearly half of the power grid and utilities, massive displacement, and atrocities such as murder, rape, torture and forced deportations.

“This proposal is not about Russia alone. It will work for the benefit of all those who are being threatened now or might be threatened later by use of force,” he said.

Speaking before the vote, Russian Ambassador Vasily Nebenzya characterized the draft resolution as “a classic example” of a narrow group of States acting not on the basis of international law, but rather trying to consecrate something that is illegal.

He said countries backing the resolution were attempting to position the General Assembly as a judicial body, which it is not.

“These countries boast about how committed they are to the rule of law, but at the same time, they are flouting its very semblance,” he added, speaking in Russian.

Nebenzya said the proposed reparations mechanism will be created by a group of countries that will decide how it functions.

“The UN will play no role in this process because the proposed mechanism is suggested to be created outside of the UN, and no one has any plans to account to the General Assembly for its activity,” he added.

Furthermore, the Russian envoy said he had “no doubt” that the funding will come from frozen Russian assets, which total billions.

Western countries have long wanted to unfreeze these assets, he said, not to return them to their owner, or to spend them on helping Ukraine, “but rather so as to fund their own constantly growing weapons supplies to Kyiv, and covering the debts for the weapons already supplied.”

The General Assembly emergency special session began on 28 February or just days after the start of the war in Ukraine.

This marks only the 11th time such a meeting has been held since 1950, in line with a resolution widely known as ‘Uniting for Peace’.

Resolution 377A(V) gives the General Assembly power to take up matters of international peace and security when the Security Council is unable to act due to unanimity among its five permanent members – China, France, the United Kingdom, the United States, and Russia – who have the power of veto.

The current special session was convened after the Council voted in favor of the General Assembly meeting following Russia’s veto of a resolution that would have deplored the assault on Ukraine.?