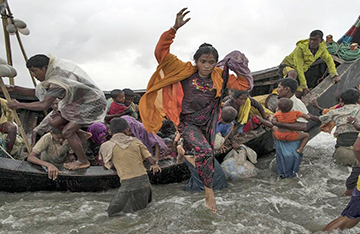 UNITED NATIONS, Dec 03 (APP): The UN refugee agency, UNHCR, on Friday, issued an alert over the dramatic increase in the number of people attempting to cross the Andaman Sea, from Bangladesh and Myanmar.

The Southeast Asia waterway is one of the deadliest in the world and more than 1,900 people have already made the journey since January — six times more than in 2020, the Geneva-based UN agency said.

“UNHCR warns that attempts at these journeys are exposing people to grave risks and fatal consequences, UNHCR spokesperson Shabia Mantoo said. “Tragically, 119 people have been reported dead or missing on these journeys, this year alone.”

Most of those risking their lives are Rohingya refugees, who fled Myanmar in their hundreds of thousands in 2017, to escape military persecution.

In an appeal for help from Governments in the region, UNHCR said that the most recent arrivals included more than 200 people in North Aceh, Indonesia, where the authorities allowed them to disembark and provided shelter. Ms. Mantoo said the agency welcomed and appreciated their efforts.

Refugees who safely disembarked on the Indonesian coast from the two boats, a fortnight ago, are currently hosted, somewhat ironically, in a former immigration office in Lhokseumawe.

UNHCR, with UN migration agency, IOM, and partners, is on the ground, the Spokesperson said.

“We are working closely with the local authorities to help support the refugees, including through registration, providing for their basic needs and working to ensure secure and adequate accommodation for the two groups.”

UNHCR has also received unverified reports of more boats with desperate individuals, adrift at sea, who require life-saving rescue and attention, she said.

With increasing levels of desperation and vulnerability forcing more refugees to make these deadly journeys, UNHCR and humanitarian partners continue to stress the need for increased regional and international cooperation to save lives and share responsibility.

Indonesia currently hosts nearly 13,000 refugees and asylum-seekers mostly from Afghanistan, Somalia and Myanmar and should not be alone in rescuing and disembarking people adrift at sea, Ms. Mantoo added.

“It is imperative that States in the region uphold their commitments made in 2005 under the Bali Process to collectively find solutions for these desperate journeys”.

In 2016, Asia-Pacific governments pledged to do more to prevent people dying on such journeys, after 5,000 men, women and children were abandoned by people-smugglers in the Andaman Sea, and left adrift, starving and sick, for months.