US accuses Russia of trying to ‘freeze Ukraine into submission’ 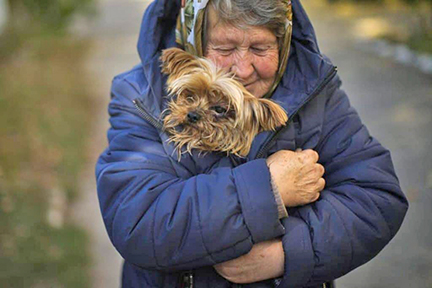 Kyiv, Ukraine, Nov 4 (AFP/APP): The United States on Friday accused Russia of wanting to “freeze” Ukraine into submission since it has failed to triumph on the battlefield, as Moscow pushed ahead Friday with moving thousands of civilians out of the occupied Kherson region.
Since Kyiv’s forces have advanced against the invading troops in the east and south of Ukraine, Russia has repeatedly rained missiles and explosive drones onto Ukrainian infrastructure.
Ukrainian President Volodymyr Zelensky said on Thursday Russia’s campaign against Ukraine’s energy network had left around 4.5 million people without power.
“President (Vladimir) Putin seems to have decided that if he can’t seize Ukraine by force, he will try to freeze it into submission,” US Secretary of State Antony Blinken said after G7 foreign ministers met in Germany.
The West vowed to assist Ukraine to rebuild after the damage by Moscow’s strikes.
The top diplomats from the club of rich nations agreed on a structure to funnel aid to Ukraine to replace infrastructure targeted by Russia after they held two days of talks in Muenster.
The United States, which has already committed more than $18.2 billion of security aid to Ukraine since the invasion began in February, is also examining options to address the damage.
US President Joe Biden’s National Security Advisor Jake Sullivan also met Zelensky in Kyiv on Friday to reaffirm US support for Ukraine.
Sullivan told a press conference in Kyiv that Ukraine had an “acute need for air defense in this critical moment”.
The Pentagon announced Friday it will fund the refurbishment of T-72 tanks and HAWK surface-to-air missiles as part of a $400 million security assistance package for Ukraine.

Ahead of a mounting Ukrainian counter-offensive, Moscow continued to pull civilians out of the Kherson region, with Putin saying residents must be “removed” from danger zones.
The Russian army said “more than 5,000 civilians” were being led across the Dnipro River every day, showing footage of soldiers directing lines of cars onto flotillas crossing over to the river’s eastern bank.
Moscow’s forces began urging tens of thousands of civilians to leave Kherson in mid-October, vowing to turn the region’s main city of the same name into a fortress.
Kyiv has likened the departures to Soviet-style “deportations” of its people.
“Those who live in Kherson should be removed from zones of dangerous fighting,” Putin said on Red Square as he marked Russian Unity Day, a patriotic holiday.
“The civilian population should not suffer from shelling, an offensive, a counter-offensive or other such things,” he said.