US Army signs deal to backfill Stingers sent to Ukraine 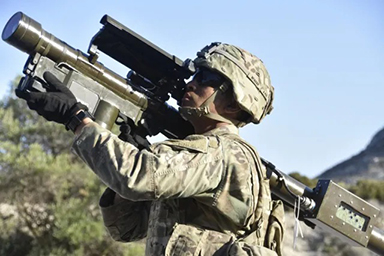 WASHINGTON — The U.S. Army has awarded a $624.6 million contract to Raytheon Technologies to build Stinger anti-aircraft missiles to restock its own supply after sending roughly 1,400 Stingers to Ukraine to bolster the nation’s defense against the Russian invasion.

“Work locations and funding will be determined with each order, with an estimated completion date of June 30, 2026,” the Pentagon’s contract announcement Friday states. Reuters was first to report the contract award, expected for several weeks.
Raytheon will build 1,300 new Stinger missiles, according to a statement issued shortly following the contract announcement.
“The contract includes provisions for engineering support, as well as the test equipment and support needed to address obsolescence, modernize key components, and accelerate production,” according to the company statement.
Stinger and Javelin have been in high-demand in Ukraine as effective means to repel Russia’s invasion. The Pentagon has the Stingers and sent more than 5,500 Javelin anti-tank missiless since Russia invaded Ukraine on Feb. 24, among other defense materiel.
Congress this month passed a $40 billion spending package for Ukraine that authorizes the Biden administration to send another $11 billion in U.S. military equipment to the country; the package includes $8.7 billion to backfill stocks already sent.
The Army hasn’t bought any Stingers since 2005 as it begins an effort to design the next generation of man-portable anti-aircraft missile while upgrading its current inventory.
The Army said prior to Friday’s news that it would be awarding a contract to Raytheon to address the Stinger’s most critical obsolete part, its dual-detector assembly, a spokesman for the Army’s acquisitions office told Defense News. The Stinger’s dual-detector seeker uses infrared and ultraviolet sensors to locate targets.
The Army also is working on a proposal to use advanced procurement dollars to buy long-lead parts and materials for advanced munitions “in full coordination with” the undersecretary of defense for acquisition and sustainment, the spokesman said.
Raytheon CEO Greg Hayes has said his company may not be able to make more Stingers until at least 2023 and, because some components are no longer commercially available, the firm will have to redesign electronics in the missile’s seeker head.
The Pentagon also recently issued a contract award of $9.9 million to Raytheon and Lockheed Martin to modify a preexisting contract for Javelin anti-tank missile engineering services as part of the effort to replenish stocks of that weapon, which is also being sent to Ukraine in large numbers.
The award follows two other contract modifications made this month worth $239 million and $309 million for Javelin production to be completed by late 2025 to backfill stocks sent to Ukraine but also supply Norway, Albania, Latvia and Thailand. The contract, which dates to 2019, has a ceiling of about $2.2 billion.
Lockheed CEO Jim Taiclet said the company aims to nearly double production for Javelin anti-tank missiles to 4,000 per year, but it would take “a number of months, maybe even a couple of years,” and that Congress could help by reshoring microprocessor manufacturing.
Additionally, the Pentagon is poised, according to CNN, to up the ante in Ukraine by also sending High Mobility Artillery Rocket Launchers and Multiple Launch Rocket Systems to the country. The Biden administration is expected to announce the move as part of its next military assistance package as early as next week, CNN reported.
New contracts to replace Javelin and Stingers sent from U.S. stockpiles were expected to be finalized earlier in the month — a very rapid pace for the Army, its acquisition chief, Douglas Bush, told lawmakers in recent congressional testimony. However, the timeline to replace the service’s Javelins could take 18 months, Army Secretary Christine Wormuth said in separate testimony.
“We’re working with both Raytheon and Lockheed to see what they can do to speed up production,” Wormuth said, adding later that congressional funding would help replenish munition stocks.
Earlier this month, Pentagon spokeswoman Jessica Maxwell reiterated that the department has been able to send Ukraine its weapons “without affecting military readiness, and we still have the necessary inventory for our needs.”
“We are continuing to work with industry to replenish U.S. inventories and backfill stocks of allies and partners, and we’ve requested additional resources from Congress through the supplemental bill to continue this work,” she said in a statement.