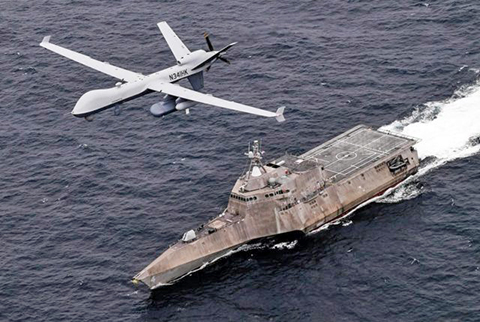 WASHINGTON: A senior US military leader said that the US is building innovative military systems in the Middle East designed to counter emerging threats from Iran and other non-state actors in the region.

Commander of US Central Command General Michael “Erik” Kurilla said during a press briefing from CENTCOM headquarters, Tampa, Florida, that the US military had developed three innovative AI military systems to counter expansive Iranian threats on land, air and sea in the region, especially its drone capabilities.

US Central Command, which has its headquarters in Qatar, in addition to its US headquarters, counts its area of responsibility as the Middle East region, Iran, Egypt, Pakistan, Afghanistan and other Central Asian republics.

In the briefing, he said that Iran had developed its capabilities into highly sophisticated drone systems with increased range and deadlier payloads, which pose a threat to the US and its partner militaries in the region.

“Iranian drones are a threat in the region. Iran commands an arsenal of drone systems ranging from small, short-range to modern intelligence, surveillance, and reconnaissance units,” he said. “They are building larger drones that can fly further with increasingly deadly payloads.”

Kurilla said that the US military see the drones’ systems of today in the same way that the US viewed the Improvised Explosive Devises or IEDs at the beginning of US wars in Iraq and Afghanistan.

He said the US was downsizing its boots on the grounds and instead would rely on interconnected AI systems that would integrate a military partnership within the region’s militaries.

He said that Task Force 59 would have a fleet of more than 100 maritime vessels based in Bahrain and Aqaba, Jordan, and would be operating together, communicating together, and providing a common operating picture to all participating militaries.

Task Force 99, which is based in Qatar, will operate aerial drones complete with tailored payloads and other capabilities operating to observe, detect and gather data that feeds into an operations center.

Task force 39 is the land component that will test concept and technology, to include a fleet of unmanned land vehicles paired with manned ground vehicles while providing new technology to defeat Iranian drones.

Kurilla said that the US was still partnering with Syrian Democratic Forces, the militia groups based in northern Syria, to counter threats from Daesh.

“Just this past week, we conducted a series of raids with our Syrian Democratic Force partners resulting in numerous Daesh operators captured, including a senior leader,” he said.

Kurilla said that while Daesh capabilities in Iraq and Syria had been significantly degraded, the group still retained capabilities to conduct operations in the region.

In Iraq, the US General said the US military continued to advise, assist and enable the Iraqi security forces in the fight against Daesh, which has been taking the lead in fighting the group in its territory.

Kurilla said that the US would release a “full roll-up of our Defeat Daesh operations in Iraq and Syria,” detailing the full tally of operations, raids, detentions, and killed Daesh operatives by the US and its partners.