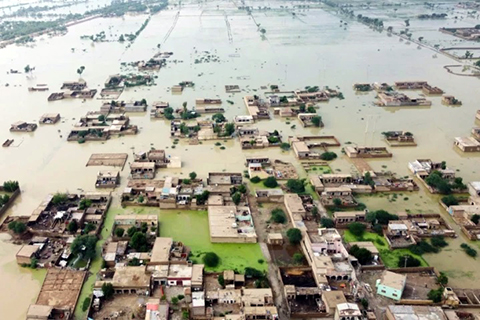 WASHINGTON, Sep 03 (APP): The U.S. military is sending a team to Pakistan to determine what support the Pentagon could provide amid deadly floods that have covered more than one-third of the country, the Department of Defence (DoD) announced Friday.
“CENTCOM (US Central Command) is sending an assessment team to Islamabad to determine what potential support DoD can provide to USAID (U.S. Agency for International Development) as part of the United States’ assistance to the flooding crisis in Pakistan,” the command’s top spokesperson, Col. Joe Buccino, said in a statement.
General Michael Kurilla, the head of CENTCOM, also spoke by phone with Pakistan’s Chief of Army Staff General Qamar Javed Bajwa, to express “his condolences for the people of Pakistan,” the statement added.
The flooding has killed more than 1,100 people — at least 400 of them children — affected more than 33 million people, and destroyed millions of acres of crops and hundreds of thousands of livestock.