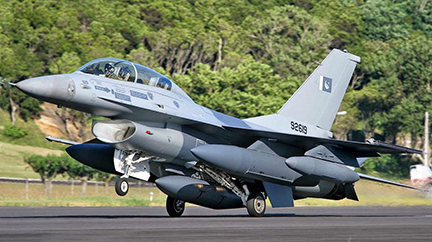 WASHINGTON, Sep 28 (APP): Antony Blinken, America’s top diplomat, Tuesday stoutly defended the sale of the F-16 aircraft maintenance package to Pakistan, as India’s External Affairs Minister S. Jaishankar, who had sharply criticized the Biden administration’s move a day earlier, listened silently while his US counterpart justified the deal saying it was aimed at bolstering the country’s capacity to fight terrorism.

Standing next to Jaishankar at a press conference following their bilateral talks on Tuesday, Secretary of State Blinken was pointedly asked by Indian journalists whether the sale was justified as, they alleged, Pakistan had used F-16 aircraft against India.

“To be very clear, this is a sustainment programme that Pakistan long had. These are not new planes, new systems, or new weapons. It’s sustaining what they have. We have a responsibility and an obligation to whomever we provide military equipment to make sure that it’s maintained and sustained,” Blinken said.

On Sunday, Jaishankar had said that the US argument that the $450 million F-16 fighter jets maintenance package to Pakistan for counter-terrorism was not fooling anybody.

Noting that the Pakistani F-16 programme was to bolster Pakistan’s capability to deal with terrorist threats emanating from Pakistan or from the region, Blinken added.

To another query from an Indian journalist asking how the F-16 jets will be used in counter-terrorist operations, Blinken replied, “Whether it is TTP that may be targeting Pakistan, whether it’s ISIS-Khorasan, whether it’s al-Qaeda, I think the threats are clear, well-known, and we all have an interest in making sure that we have the means to deal with them. And that’s what this is about.”

While Jaishankar had made the jibe about the F-16 sale on Sunday, he didn’t add any comments at the press conference.