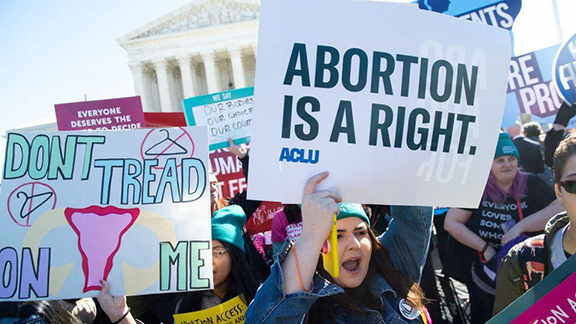 The US Supreme Court has overturned Roe v Wade, the landmark ruling that granted the right to abortion for nearly five decades in the United States, in what President Joe Biden has described as a “sad day” for the country.
In a decision released on Friday, the country’s top court ruled in a Mississippi case that “the Constitution does not confer a right to abortion”. The justices voted 6-3, powered by the court’s conservative supermajority.
“The authority to regulate abortion is returned to the people and their elected representatives,” the ruling reads.
The decision follows the leak last month of a draft opinion indicating that Roe v Wade would be overturned. That sparked widespread protests and condemnation across the US, with reproductive rights advocates saying millions of women would no longer have access to abortion services.
More than two dozen US states are likely to ban abortion now that the 1973 legal precedent has been overturned, according to the reproductive rights group Guttmacher Institute.
“The health and life of women in this nation is now at risk,” Biden said during a live address on Friday afternoon, describing the Supreme Court’s ruling as “a sad day for the court and for the country”.
“State laws banning abortion are automatically taking effect today, jeopardising the health of millions of women,” Biden added.
In Friday’s ruling, the justices held that the 1973 Roe v Wade decision that legalised abortions performed before a fetus would be viable outside the womb – between 24 and 28 weeks of pregnancy – was wrongly decided because the US Constitution makes no specific mention of abortion rights.
The Roe v Wade decision had argued that the right to personal privacy under the US Constitution protected a woman’s ability to terminate her pregnancy.
Later, the Supreme Court in a 1992 ruling called Planned Parenthood of Southeastern Pennsylvania v Casey reaffirmed abortion rights and prohibited laws imposing an “undue burden” on abortion access.
Conservative Supreme Court Justice Samuel Alito, in the opinion issued on Friday, wrote that Roe and Planned Parenthood v Casey were wrong the day they were decided and must be overturned.
“We hold that Roe and Casey must be overruled. The Constitution makes no reference to abortion, and no such right is implicitly protected by any constitutional provision,” Alito wrote.
Justices Clarence Thomas, Neil Gorsuch, Brett Kavanaugh and Amy Coney Barrett also voted to overturn Roe. The latter three justices were appointed by former President Donald Trump.
While Chief Justice John Roberts also voted in favour of the decision, he wrote that he would have upheld the Mississippi law at the heart of the case – a ban on abortion after 15 weeks of pregnancy – and stopped there without overturning the Roe decision.
Liberal justices Stephen Breyer, Sonia Sotomayor and Elena Kagan were the dissenting votes.
“With sorrow – for this Court, but more, for the many millions of American women who have today lost a fundamental constitutional protection—we dissent,” they wrote.
Opinion polls have suggested a majority of Americans support abortion rights. But overturning Roe has been a goal of anti-abortion rights activists and Christian conservatives for decades, with annual anti-abortion rights marches taking place in Washington, including in January of this year.
US Senate Republican Leader Mitch McConnell welcomed Friday’s ruling as “courageous and correct”, saying it marked “an historic victory for the Constitution and for the most vulnerable in our society”.
Anti-abortion rights activists also celebrated outside the top court in Washington, DC, as news of the decision broke. “The Court has correctly decided that a right to abortion is not in the constitution, thereby allowing the people, through their elected representatives, to have a voice in this very important decision,” Carol Tobias, president of National Right to Life (NRLC), an anti-abortion group, said in a statement.
But human rights and reproductive justice advocates slammed the decision as a “catastrophe” that will deprive millions of people of the right to make decisions that affect their futures, and disproportionately harms low-income women and communities of colour.
“Today marks a grim milestone in the history of the United States,” Tarah Demant at Amnesty International USA said in a statement. “Millions of people who can become pregnant in the United States now face a future where they will not be able to make deeply personal choices that affect their bodies, their future, and the well-being of their families.”
“We know you may be feeling a lot of things right now — hurt, anger, confusion,” Planned Parenthood wrote on Twitter. “Whatever you feel is OK. We’re here with you — and we’ll never stop fighting for you.”
The American Civil Liberties Union (ACLU) also said, “Today’s decision is a gender, racial and economic justice catastrophe with deadly consequences. Women and people who can become pregnant have been forced into a second-class status. The impacts will fall hardest on Black women who already face a severe maternal mortality crisis.”