US to provide Patriot missile system to Ukraine 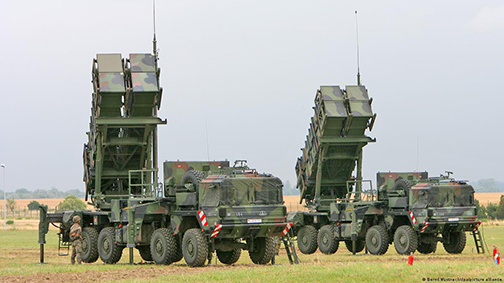 Washington, Dec 22 (AFP/APP): The United States said Wednesday it would provide Ukraine with the advanced Patriot air defense system to help counter Moscow’s relentless aerial attacks.
The system is part of $1.85 billion in security assistance unveiled in parallel with a visit to Washington by Ukrainian President Volodymyr Zelensky, his first trip outside the country since Russia invaded in February.
The announcement is a significant victory for Kyiv, which had repeatedly pushed Washington for the Patriot system, and a strong sign of US support for Ukraine.
“Today’s assistance for the first time includes the Patriot Air Defense System, capable of bringing down cruise missiles, short-range ballistic missiles, and aircraft at a significantly higher ceiling than previously provided air defense systems,” US Secretary of State Antony Blinken said in a statement.
The security assistance package features one Patriot battery, which consists of a command center, a radar station to detect incoming threats, and missile launchers.
The package also includes tens of thousands of rounds of artillery, rocket and tank ammunition, mortar systems, grenade launchers and body armor.
Ukrainian President Volodymyr Zelensky hailed the Patriot announcement, saying the system “will strengthen our air defense significantly.”
“This is a very important step to create a secure air space for Ukraine,” he told journalists through a translator at a news conference alongside President Joe Biden at the White House.
Ukraine’s air defenses have played a key role in protecting the country from strikes and preventing Moscow’s forces from gaining control of the skies.
But as Russia faced increasing setbacks on the ground, it began systematically targeting critical infrastructure in Ukraine in attacks that have disrupted electricity, water and heat to millions of people.

Made by Raytheon, the MIM-104 Patriot is a surface-to-air missile (SAM) system initially developed to intercept high-flying aircraft.
It was modified in the 1980s to focus on the new threat of tactical ballistic missiles, and proved itself against Iraq’s Russian-made Scuds in the first Gulf War — the first time the system was used in combat.
While Russia has not used many ballistic missiles during its war on Ukraine, Washington says Moscow has discussed acquiring them from Iran.
“Unlike the other Western systems that have been provided to Ukraine, (Patriot) has some anti-ballistic missile capabilities (depending on the type of missile being used),” Karl Mueller, a senior political scientist at the RAND Corporation, told AFP.
“If Russia were to acquire substantial numbers of ballistic missiles from Iran, as many have predicted, most other Ukrainian air defense systems would not provide any protection against them,” he added.
Patriot has been proven effective in Saudi Arabia against Iranian-designed ballistic missiles fired from Yemen, and primary contractor Raytheon says the system has intercepted more than 150 ballistic missiles in combat since 2015.
When Russia invaded in February, Ukraine’s air defenses largely consisted of Soviet-era planes and SAM systems, which Kyiv used effectively to deny Moscow air superiority.
They have been significantly augmented since the start of the war: The United States provided NASAMS and Germany IRIS-T — two advanced systems — while older equipment such as the S-300 and HAWK systems and Stinger missiles have also been donated.
Kyiv has used various systems to battle Moscow’s cruise missiles and bomb-like Shahed-136 drones, but modern SAM system launchers and missiles — including NASAMS — are in short supply.
The goal of Ukraine’s international supporters is to build multi-layer air defenses for the country consisting of low-, medium- and high-altitude systems that can protect against a variety of threats.