USAF to Unveil B-21 Stealth Bomber in December 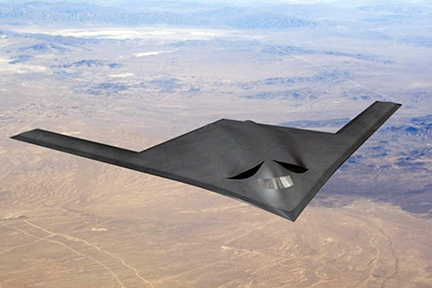 The U.S. Air Force will roll out its new B-21 stealth bomber the first week of December, the service’s top weapons buyer said Tuesday.

Andrew Hunter, the assistant Air Force secretary for acquisition, technology and logistics, gave no more details, not even a location for the rollout, which is expected to mark the first public view of the aircraft, which has been developed in near-total secrecy. He spoke Tuesday at the Air and Space Forces Association’s Air, Space & Cyber conference outside Washington, D.C.

Northrop Grumman is building the B-21 at a factory in Palmdale, California. The aircraft is expected to make its first flight in 2023.

The rollout week coincides with the Reagan National Defense Forum, when dozens of top military officials are already in California, about one hour from Palmdale.

“We’re rolling out on the time frame we anticipated … and we’re on the schedule that our customer promised Congress,” Tom Jones, the president Northrop Grumman Aeronautics Systems, said in an interview. “It’s great. There’s going to be a lot of people really happy [who work] on the B-21 program when we do this in the first week of December.”Jones pointed to employees showing up to build the plane throughout the pandemic.“Obviously there was no work for home on B-21,” he said.