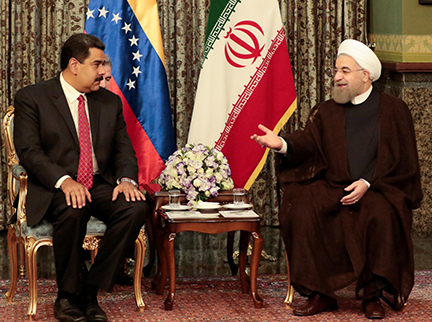 Venezuelan President, Nicolas Maduro, announced on Friday that a 20-year cooperation plan with Iran will be signed, as he arrived in Tehran for a two-day official visit, Reuters reports.

In an interview with the Iranian television station, Hispantv, Maduro announced the opening of a weekly flight route from Caracas to Tehran and said Venezuelan coffee could be sold to Iran, alongside the plan to sign an agreement on Saturday in different areas of cooperation.
Details on the cooperation plan were not provided.
Hispantv also said Maduro will meet with Iran’s President, Ebrahim Raisi, during the two-day visit.
Iran and Venezuela, both sanctioned by the United States, have expanded cooperation since 2020, particularly for energy projects and oil swaps, helping the Caribbean nation ease the effect of Washington’s measures.
In May, Iran’s state-owned National Iranian Oil Engineering and Construction Company signed a contract worth about 110 million Euros to repair Venezuela’s smaller 146,000 barrel-per-day refinery.
The agreement was sealed after recent negotiations attended by Iranian Oil Minister, Javad Owji, who was in Venezuela early last month and met with Maduro.
Maduro arrived in Tehran on Friday as part of an official trip that earlier this week included Turkiye and Algeria. He said he was accompanied by ministers and officials in areas including agriculture, technology, oil, communications, tourism and transportation.