Which drone was used in Al-Zawahiri strike? 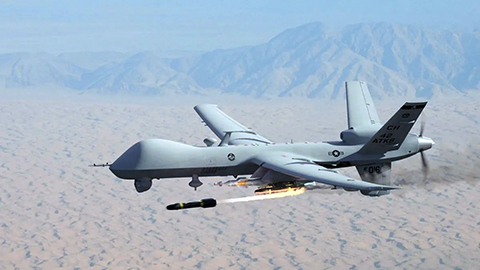 WASHINGTON – The U.S. most likely used an MQ-9 Reaper drone launched from a country in the Arabian Peninsula in the strike that killed al Qaeda leader Ayman al-Zawahiri in Kabul on July 31, security experts said.
The MQ-9 Reaper, made by a subsidiary of General Atomics, has reportedly been utilized in many notable strikes across recent presidential administrations. It may have been used in the 2020 assassination of Iranian General Qasem Soleimani, according to The New York Times.
The White House announced the successful operation on Aug. 1, without saying how it was conducted. The Associated Press reported that the CIA carried out the strike, citing five people familiar with the matter who spoke on the condition of anonymity. Neither the CIA nor the White House disclosed the type of drone used in the attack, but experts said the Reaper makes the most sense given its endurance and weapon capabilities.
“It was the CIA that probably conducted the strike and they fly MQ-9 Reaper drones just like the Air Force does,” said Stacie Pettyjohn, the director of the Defense Program at the Center for a New American Security, in an interview.
General Atomics produces several types of armed drones, including the Reaper, which entered service in 2007 as a successor to the Predator attack drone. As a “hunter-killer” drone, the Reaper serves as the primary offensive strike unmanned aerial vehicle for the Air Force but is also employed by other government organizations, including the CIA.
The Reaper is the Air Force’s first unmanned aerial vehicle designed to engage time-sensitive targets on the battlefield as well as provide intelligence and surveillance. They are 36 feet long with 66-foot wingspans and can fly for as long as 14 hours fully loaded with laser-guided bombs and air-to-ground missiles. They can fly twice as fast and high as MQ-1 Predators, reaching speeds of 300 mph at an altitude of up to 50,000 feet.
Even after 15 years in service, the Reaper has a corner on the market, said Dan Gettinger, the founder and former co-director of the Center for the Study of the Drone at Bard College.
“There’s a host of other countries and companies that are developing drones that resemble them physically and in trying to mimic its capabilities as best as possible,” Gettinger said in an interview.
He specifically pointed to the Chinese Wing Loong and Rainbow series of drones and the Turkish Anka, all of which appear similar to the Reaper.
The Reaper has been central to the U.S. government’s targeted killing program counterterrorism program, which has faced renewed criticism this year for its high civilian casualties.
The Reaper uses Hellfire missiles, precision-guided munitions for air-to-ground strikes made by Lockheed Martin that typically cause large damage to the area surrounding a target.
A senior administration official said Monday that two Hellfire missiles were used in the al-Zawahiri strike. Social media images from the attack suggest that the missiles were modified to have no warhead explosives and instead use six blades that rotate and spin to kill a target, therefore minimizing collateral damage.
The official said Monday that al-Zawahiri was the only casualty in the strike. General Atomics and the White House did not respond to requests for comment. C4ISRNET also reached out to the CIA for comment.
The Reaper is not the only drone equipped to use Hellfire missiles. Most recently, General Atomics unveiled its Mojave drone — a short takeoff and landing platform that could also be equipped with up to 16 Hellfire missiles — in December.
The Mojave is based on the avionics and flight control systems of MQ-9 Reaper and MQ-1C Gray Eagle-ER but is focused on short-takeoff and landing (STOL) capabilities and increased firepower. It features enlarged wings with high-lift devices, and a 450-HP turboprop engine, according to General Atomics.
Although General Atomics has sought to sell the Mojave platform to Special Forces, no contracts have been announced. Pettyjohn said she wouldn’t expect the U.S. to be using the Mojave or another lesser-known platform the CIA might have in service when a Reaper could get the job done.
“I wouldn’t expect them to be using one of their really exquisite, more low observable systems because there is no air defense threat,” Pettyjohn said.
Pettyjohn said that given Afghanistan’s lack of air defenses — the country does not have a robust air force or ground base systems — a Reaper could easily fly in from a nearby country and loiter above the target before striking with minimal need for defensive measures.
Following the August 2021 troop withdrawal, the U.S. sought to establish over-the-horizon agreements with nearby countries, such as Kyrgyzstan and Tajikistan, to maintain counterterrorism capabilities. Such agreements have not materialized in the year after the withdrawal, leaving the U.S. to rely on countries in the Arabian Peninsula.
“The Reaper has the longest range,” Gettinger said.
Gettinger said that because of its long range, it is feasible a Reaper could make the journey from the Arabian Peninsula across Pakistani air space – avoiding Iran – and enter Afghanistan.
Pettyjohn said that it is likely the drone came from either Al Udeid Air Base in Qatar or Al Dhafra Air Base in the United Arab Emirates. Both locations have a history of drone operations and are closer to Afghanistan than other allied countries, such as Saudi Arabia.
Air Force Secretary Frank Kendall said in a March 25 briefing with reporters that the service was planning to transfer 100 of its more than 300 MQ-9 Reapers to “another government organization.” Such language is typically used to describe the CIA or other clandestine government organizations.